Hey everyone. A lot has happened over the past few months, including an improvement in my economics, which in turn has allowed me to boost the  budget for Broken Reality.

Kaliska, Nao, Onyeka, Azar, Hana and Hachi will all be getting their own, exclusive arts, rather than the public/DLC ones I have been using until now. Nanashi/Stoichion is handling the busts and facesets (and after that we'll probably have CGs too), and you can check him out at: https://www.deviantart.com/stoichion .  (Bloodfang is debatable for getting a look update, I'm pretty satisfied with how he is now, will have to think about it).

The first one I asked him to do is Kaliska, and I gotta say I'm impressed with the results. All of the girls will have 3 busts per outfit for general emotions (neutral/amused/irritated), and at the very least 2 outfits (Hana will have like 5 at the very least) which will have their very own bust images, apart from the sprites! At the moment he is working on Kaliska's second outfit, and after that we'll be moving to another girl to remake. Which one do you think we should go for next?

Naturally I am still developing the game as well, I assure you this is not a dead project. I'm just kinda embarrassed by how long it's been taking me to release a new update, and I still see no end in sight.

In my plans for the game's future, after the game gets released on Steam, add a DLC that will be exclusively outfits, and in all likeliness they will be based on fan votes. 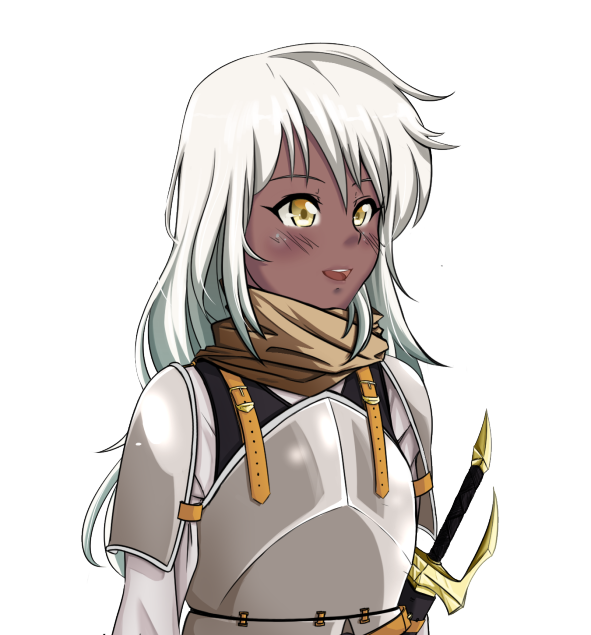 The new and improved Kaliska, what do you thing? (amused HD bust)