Meet Anacaona, a witch doctor, and the second possible companion for "Into the Jungle".  Basically, you will visit the area with Kaliska (if you're an "adventurer" and have done Kaliska's previous quest, which has also had its dialogues updated), get directed to an introductory dungeon by the locals, and meet Anacaona and Nahuatl. You will finish the dungeon with them, but after that you will have to choose which of the two you want as a companion for the rest of your adventure, as they really don't like each other.

Nanashi is currently making her facesets, but I gotta say, I'm impressed with the level of detail this time. You can find more of his work here: https://www.deviantart.com/stoichion 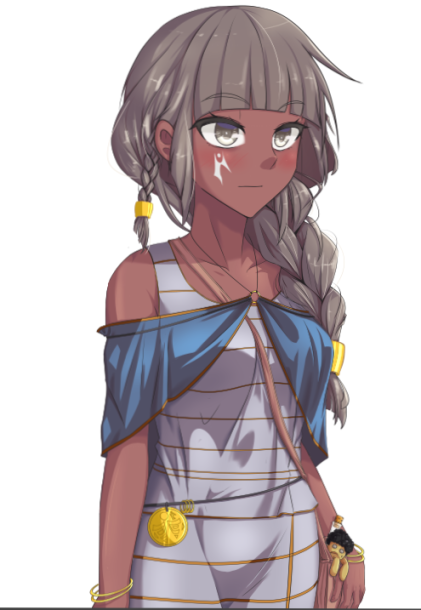 Now with Kaliska's new graphics, I'm going through all the old dialogues that involved her, and rewriting them so that her personality matches her new looks. I've completely remade the original time you meet her, in the first floor, I have also updated her dialogues in her first mission exclusive for "adventurers" and also the time you meet her in Floor 8, adventuring through the lands taken by the demons.

Currently what's left is Floor 3's first dungeon where you meet the dark elf queen, that I want to change even more (I wanna make it from 1 floor + boss fight into 3 floors + boss fight), Floor 5's meet for the desert crawler boss fight (actually I'm close to finishing that too), the date you and Kaliska later have in Asari, and finally Floor 7's dinner party where the player will first meet her with her formal outfit (thus unlocking it for all future encounters with her).

Of course I've not limited myself to small revisions. While initially you just met the desert crawler in a 2 floor mini-dungeon directly connected to the central desert area (and therefore much closer to a resting spot), the boss fight now happens a total of FOUR dungeon floors, and even after it is done, you still have another THREE dungeon floors to go, before you can return to the desert.

Also (and unfortunately I haven't even began to work on it properly yet), I want to add a wedding-plot for Kaliska. Basically in Floor 7's dinner party, you will be meeting Kaliska's future husband and his sister, (not that Kaliska cares much about marrying, but she is not one to disregard her father's wishes). The idea is that if the player wants to romance Kaliska, he will oppose Kaliska's fiance and her future sister-in-law, who will then be antagonists for the rest of the game.

I might explain in another post my current philosophy to dungeon design, which has changed a lot from the initial way I made areas, but to sum it up, the difficulty is now based on a battle of attrition, having the player travel long distances without a chance to refresh their resources.

That is, Kaliske absolutely does not give a damn about her future and personal life? Seriously?
As for me, an extremely stupid decision with a wedding and limp following her father’s will simply because she cannot say no. Firstly, the Kaliska in this case will be shown as an absolutely limp and stupid person who is incapable to make his own decisions regarding her future and personal life. Seriously, how can she not worry about marriage if her life has completely changed. And given the manner of marriage, most likely her only task will be to service her husband. Secondly, what's the point of trying to win the heart of a girl who absolutely does not care who to marry and with whom to sleep.

For me personally, this approach completely kills her as a character. And I really hope that this approach will not be in the romantic lines of other heroines.

Her character has always been that she is selfless to a fault (and I mean "fault" literally, she is almost self-destructive) and lacks confidence in her decision-making. In the new patch she gets a lot of screentime, so the player can see her better.

Kaliska doesn't want to get married either, but will not act on it on her own (as I said, I haven't even began working on that part, so I'm still thinking about how she would act, I am currently doing other parts).

As for the type of marriage... Well, Psema is a very sexist place, toxically patriarchical in most areas. Theodoxa and the areas surrounding it are the only places I have designed so far with a strictly matriarchical system , and they are their own brand of horrible. Imperia and its lands are far more gender-neutral mostly because of Ezalor and his stoicism (if you side with the Queen it turns into a more patriarchical society like the Town of Beginnings and if you side with Leona is turns into a far more socialist place), but Asari specifically has long-since had strictly patriarchical traditions. [I have expanded Asari to also have an eastern part, and with all the new events it is very clear that the locals and the occupying force (Imperia soldiers) have very different cultures and thinking. For example at one point you find a guard and a merchant arguing about the punishment of a thief. The guard is saying that by law he should just do community service for a day, the merchant says it is tradition that he has a hand cut off. The guards see the people of Asari as barbarians, the people of Asari see the guards as uptight fools meddling in things that do not concern them].

The more I write it here the more messy it sounds, but it's quite clear in the new patch, because I've mapped out the place better, aka separated the floors into specific kingdoms, all of which have more or less the same cultures/values. Floors 1-4 and 10-11  are the kingdom of Yudah, and belong to king Rune (the old man in the Black Iron Palace). Floors 5-9 and the new floor from Into the Jungle and the kingdom of Petros, belonging to king Ezalor/queen Oracia/queen Leona depending on who you side with.

To come back to Kaliska, she is too pure of heart, so she listens to what others tell her unless it goes against her conscience. It is self-damaging. (she actually has a lot of Hana's old qualities)