(Currently changing the smaller brothel "Gentleman's Rest" in Asari ~Floor 5~, to both use the new sprites and following the updated lore where the Asari Girls ~the ones with shaved heads~ are not drunk prostitutes, but instead almost non-human creatures, capable of living for centuries and showing other non-human qualities. In a future update ~definitely not the next one~ I might include a dungeon showing exactly what the Asari Girls are (yes, of course it's lovecraftian in nature). After I finish an h-scene with Hana and and one of the new NPCs related to another quest I have made, I will remake the dark elf queen dungeon in Floor 3 ~the event of the queen itself will remain the same, but the process to get there will change, as I was very disatisfied with how little sense it made for the first floor of the church to be absurdly large and the second one, where the boss is, to be so tiny. Instead, the church will now be much smaller, but access from the first to the second floor will be blocked, and the players will have to explore caves underneath the church to be able to access the second floor.)

As another sidenote, I'm getting tired of waiting for a new release myself, so instead, I think I will start rereleasing the game Floor by Floor. Floor 1 is basically all done, so as soon as a friend gives me some of the new-style graphic sprites I had asked him to make (he is currently on holidays that will end soon with no internet but he does have the laptop with him to work on them) I will just copy-paste them into the game and immediately upload it. Basically even after you finish Floor 1 you will not be able to progress to Floor 2, but I think it is better than just not being able to play at all, & it will be way easier on me when the bugs start showing up (and they "will" start showing up).

Things remaining to be done:

Floor 2: I wanna remake Imperia Academia and N'Gombe dungeon (the minotaur boss). Waiting for Nanashi to finish the Azar graphics for both of those.

Floor 3:  Church remake for the dark elf queen boss fight. The boss fight itself will remain unchanged (though it is still different from the version you guys have played until now).

Floor 4: Bloodfang meeting change. Basically instead of a stupid "oh we didn't know you were a good werewolf" (god I was sloppy), Hana will have already been ordered by Mother to recruit him, and you will be visiting the place specifically looking for him. Some bounty hunters will trap him and you in a cave, which is however connected to tunnels underneath it, and after finishing that mini-dungeon, you will come out behind the bounty hunters and ambush them instead. After that Bloodfang will join the party. (the cryomancer plot will not change)

Floor 5: Finishing up another of Hana's h-scenes and a few dialogue changes in "The Gentleman's Rest" brothel related to the new lore and the new quests. After that, I want to remake Kaliska's date (exclusive for Sword Artists) completely, this time being a proper dungeon-crawling instead of a comedy-like date to her house. Finally I want to add a bathouse in the new part of the city (the eastern part, Asari is now made of 3 large maps) for an h-scene with Bloodfang that I have already written.

Floor 6: I need to make a small new area to replace the old purchasable mansion (will probably be a small dungeon or insanity-based house-exploring). Aiming to make something creepy but small out of it.

Floor 7: In Grum's restaurant above the arena, I want to remake the dialogues with Kaliska, using the new graphs, as well as introducing her potential fiancee. In a future update I might also change the event where you recruit Hatchy to be a small dungeon instead, but it will not be in this one.

Floor 8: I wanna add a small area just below Imperia, which will be like a small land just outside the walls, connected to the river, since I felt that on its own, Imperia is too small for a capital (the Town of Beginnings is 4 maps total & sewers, Asari is 3, Theodoxa is 6). It will have a shop and like 2 NPCs to talk to, nothing major. In a future update, I want to extend Leona's rebellion questline a bit, specifically adding another task or two to be done before the rebellion begins. In a further future update, I actually want to make a pretty big event for players who specifically followed Leona's quest-line, with a possible ending for the game in it.

Floor 11: Lets see... a)I want to add an insanity event where an illusion of Hana tries to make you cut your throat. b)Continuing on one of the new quests of Floor 1, I want to make a magus chase after you seeking revenge (depending on how you resolved the dialogue with him on Floor 1, he will probably not appear at all, but I want to add it as a potential consequence). c)I need to make a proper Floor boss dungeon again. d)In Taft, I wanna add a small event in one of the shops for increasing your Hatchy romance and unlocking her winter outfit that I had posted previously. e)probably extend the forest a bit, so it becomes a proper little dungeon (similar to Illfang's Forest in Floor 1).

Tlanextic: A lot left to be done (though I have planned exactly what to do for each of them, so I will not be wasting time on thinking up stuff).

General updates for things left to be done: I wanna find a skill system based on the player's level (I'm not going to make it myself, I just need to find a script from the web). I also need to complete the common events for wardrobes so the player can equip the various outfits he has unlocked on the characters. And of course, Nanashi will be remaking Hana's, Nao's and maybe Onyeka's graphics. Afterwards Bloodfang and finally maybe the player, though these can be done retroactively and don't need to be set beforehand (aka I've done the groundwork for those and when the time comes I will just copy-paste them into the game files).

With those out of the way: Here's the new Azar! I decided to go for an even more loli-look than the original, and her character will change slightly respectively (she is no longer cartoonishly over the top, though she is still just as ambitious, albeit for more sensible reasons).

As always, art from Nanashi: https://www.deviantart.com/stoichion 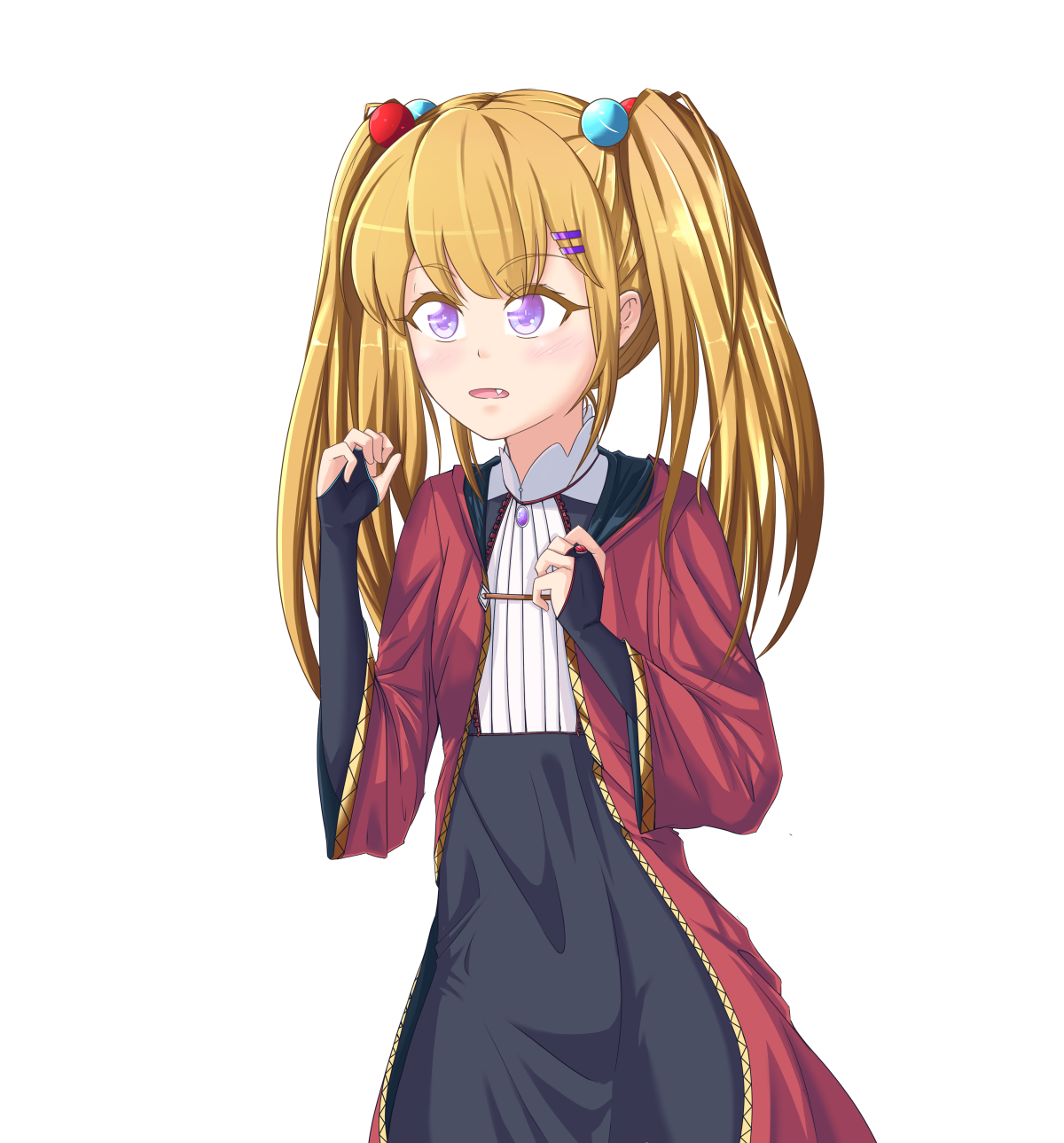 I really hope he release it soon I CANT WAIT 🤩

Honestly, I've been checking this game regularly since the beginning(the thing that led me here was looking for games based on SAO). At this point it doesn't seem like it's going to be the same game as the one that made me interested, so I too hope he releases it soon. Probably around November though for it.